So….apparently January is National Stalking Awareness Month.  I’m not really sure how I came across this tidbit of information, but nevertheless I wanted to share with you all a “must-read” article I read in the December issue of Women’s Health.  If you have a Twitter or Facebook account, or even a blog; for your own safety you should read this post. I will try to highlight the most important parts of the article. 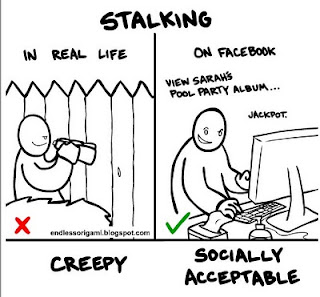 Before I get into the article, let me step on my soapbox.  I do not understand why people feel the need (especially girls) to “check in” on Facebook or Twitter to tell the world where you are.  Why not just invite creepers to your house, unlock the door, get in the shower and wait for an attacker?  Seriously…it takes two seconds for someone to find a picture of you, find your exact location, and go exactly where you are, strike up a “casual” conversation with you, and BAM before you know it you’re in a situation you would never have expected.
The New Privacy Predators
(Women’s Health Magazine)
“Bonnie Russell was having lunch with a friend in a pub near Detroit when she got a wake-up call—one that actually came on her cell. A few minutes earlier, she had used the phone to snap a photo of her lunchtime combo: “A lot of seriously unhealthy fried crap” she called it when she posted it on Twitter with the wry title “Lunch of champions.” She received a tweet back from a total stranger who had found her public Twitter feed and used it to track down the neighborhood where she was having lunch at that very moment.”
How did this stranger find her exact location?   Geotags are GPS coordinates that can be added to digital files—most commonly photos—and used to pinpoint your location by as close as a 10-foot radius. Many GPS enabled smartphones embed these tags in photographs automatically, and you don’t even know they’re there.  While that could be a good thing if you were ever lost and needed to be found; it can turn bad by inviting unwanted strangers into your daily path.
“Already there has been an uptick in other types of social-network related crime: Last March, for instance, the house of an Indiana woman was robbed after she updated her Facebook status to say that she and her fiance were going out for the night. In September, New Hampshire police busted a burglary ring that targeted people based on the locations they posted on their profiles. And a recent Justice Department report found that a quarter of stalking cases in the United States involve cyber stalking, and one in 13 victims reported that GPS technology or another version of electronic monitoring was used.”
The article also goes on to say that most people don’t think privacy issues and sharing location information is dangerous because “It boils down to personal experience. If everybody is using the technology, and you don’t know anybody who has been kidnapped or had their home broken into, it can’t really be that risky, right?” ….WRONG!
Before reading this article I didn’t think it was a big deal to put on my status, “Going to Dallas for the weekend” (or whatever town) because what did it matter?  But, what you are really saying when you announce that you are out of town, or at the movies, or going out downtown, is: “We won’t be home, come rob us.”  I know it may sound extreme, and I still probably share too much information myself, but I am more aware now, and I’m sharing this with you so that you can be as well.  The article recommends that if you feel the need to share where you are to wait until you are home and say something like, “Our vacation was great; glad to be back” not “Going on vacation for a week”.
More recommendations for protecting yourself from cyber stalkers is to disable geotags on your pictures, manage your “friends” list, do not share your address or phone number in your profile, and to change your passwords about every 12 weeks.