Holy Moly! I had no idea it has been 2 whole weeks since I have updated my blog; sorry readers but sometimes life takes over and until I get paid to blog daily; I gotta go where the money leads me.
Preface
I used to think people who run with an Ipod or to music should not be considered real runners.  Because, afterall real runners shouldn’t and don’t need music to listen to.  When people would pass me in races wearing an Ipod with the music blasting I would think to myself, “Yeah, well if I had some jammin music I’d probably be running a lot faster, too”
Just like when I see someone who weighs 120 pound pass me I think, “Yeah, well if I didn’t have to carry around 25 more pounds I’d be fast too”…but that’s neither here nore there.
My thinking on runners with Ipods changed a bit after reading the following article in this week’s Austin American Statesman, by Pam LeBlanc titled, “Marathon for the Masses: Are hordes of slow pokes ruining the marathon?” And while this article has nothing to do with Ipod-wearing runners, it has a lot to do with marathon runners who think they are high and mighty; which is what I would call myself with my “real runners don’t wear Ipods thinking”.  Because honestly, who do I think I am by qualifying people as legit or not? And if wearing an Ipod while one runs gets that person’s ass off the couch and on to the treadmill or the road then by golly, put that Ipod on and go!
Marathon for the Masses
Basically, the article by Pam LeBlanc talks about the evolution of the marathon and whether or not it’s good or bad that so many people are attempting to run one.
“Marathons have evolved from serious sporting events for top-notch athletes to rolling road parties with people in costume, bands every few miles, and people walking — instead of running — stretches of the race.
Some hard-core runners, though, say slowpokes are zapping the marathon of its prestige. Once, only the best runners finished marathons; now scores of mediocre athletes (and non-athletes) are pounding out 26.2 miles.
They argue that a six-hour finisher isn’t really ‘running a marathon,’ he’s just participating” (LeBlanc).
Apparently this viewpoint has caused a great debate amongst hard core runners and recreational runners.  I can’t say that I didn’t think the same way in my “hard-core” runner days.  But after reading this and reading LeBlanc’s viewpoint stating,
“At a time when about two-thirds of U.S. adults are overweight and third are obese, according to the Centers for Disease Control and Prevention, isn’t encouraging regular folks to exercise a good thing? The slow runners don’t interfere with fast runners, who are long gone before they cross the finish line. Besides, without the masses signing up and paying race registration fees, they note, some marathons couldn’t stay in business.” I can’t help but agree that at least people are being active, accomplishing their goals, and trying to lead healthier lives.
The article goes on to share other runners’ opinions and spans from running a marathon too quickly is like “rushing through a good meal” to “Just because you run an 8-hour marathon, that doesn’t make it less of a great feat than someone running a 2:05 marathon,” (Ruth England)
Another runner recounted that one of his best marathons was running from the back and taking in all that the race had to offer.
From my experience running both in the front of races and in the back with the slow pokes, I stand by my new-found opinion of, “Who am I or anyone else to tell someone their marathon doesn’t count because they didn’t run it under 4 hours.  Just as running with or without an Ipod matters none either.”
I have realized that when I am in “race mode-front of the pack action” I do miss out on a lot of the course. I don’t notice the motivational signs people are holding, I don’t notice the trees or houses lining the course. I am straight-ahead, focused. Some would argue that takes the whole fun out of running, and at times I may agree.
Running the Houston Marathon with Rick at a much slower pace than I’m used to, made me realize how fun running can be…chatting along the course, cheering on other runners, high-fiving the crowd, posing for pictures, stopping to use the restroom 2 times…well, let me just show you the difference in pictures. 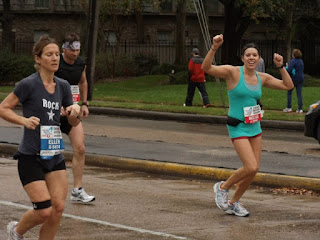 Moral of the story
Thank you, Pam LeBlanc for publishing an insightful viewpoint on the sport (competitive and recreational) of marathon running. I think people need to learn that not everyone trains or competes the same, and they shouldn’t.  Not all of us were meant to run marathons and not all of us were meant to win them…let the lead runners run, eat all the post-race goodies, and get in their ice baths and let the slower runners enjoy reaching their health and fitness goals and finish whenever and however they want to.