About a year ago after Rick and I ran the 3M Half Marathon, he semi-mentioned that he would like to try running a marathon one day.  We talked about it a bit and then moved on to something else.  When the Houston Marathon lottery registration came around in August, I asked him if he was seriously considering running a marathon and that if he was, we should enter the lottery for Houston and see if we get in.  I told him that once we found out we were in; that it would be a sign, that it would be my last marathon and that I would train and run the whole thing with him and….then we got in…and the training began. 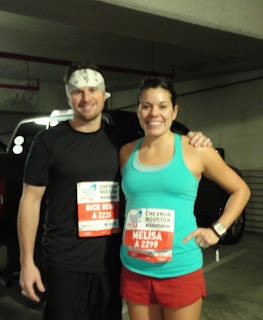 As we started training more and more, I started getting the itch to try and qualify for Boston again.  When Rick and I would do our long runs together, I’d get impatient and run ahead, and it started becoming more about me and my marathon, than Rick and his first marathon.  The whole time I trained, I kept going back and forth in my mind about whether or not I should try to qualify or run with Rick as I suggested in the first place.  My training runs were on pace; my weekly interval workouts were strong, I got ART once a week, and I was healthy….
Until I got the flu just a few days before; or as I like to think of it as “divine timing” a “you better watch it before you get checked” – sign that maybe not all of this is about me for once.  And I was stuck trying to decide whether to run while I was sick and still try to qualify (virtually impossible) or run with Rick as I said I would and support him along his 26.2 mile journey.  It’s funny how things work out because I know that if I would not have gotten sick, I would have run the marathon for myself, and left Rick in the dust to do it alone.  Instead, I got to run and talk and support and feed (for real, I was grabbing bananas from people wherever I saw them) my awesome husband the entire way.  A few times I got a little emotional because I knew what a feat this was for him.  And of course, a part of my selfish-me was worried that my finishing time would be forever on my race record, but you know what?…none of that matters because sometimes it’s not about me.

Moral of the story: Just when you think you can take full control of your life and think you have everything planned the way you want, the big man upstairs always knows better, and His way always ends up the best way whether or not you may think it is at the time.