Tears, Balls, and 35 Days Down

“The Yoga is telling you something.  You’re doing too much”
The above are words of wisdom I got after consulting with one of the instructors after class.  Words that after he said them, I said to myself, “No, chit…This. Is. The story of my life”
Tears…Oh, Silly Tears
I cried a few days ago.  I had a horrible yoga class.  Every posture (even the easier ones) bothered my hamstring.  I went home, vented to Rick and cried.  I admit, it was a bit ridiculous.  Who the hell cries about yoga? Seriously….it’s YOGA. Not a terminal illness.
*In my defense, my hormones were ahem..not in their natural state last week*
Le’ Hammie Situation
I strained my hamstring doing handstand walks…which is a relatively easy task, but apparently since my hammies are uber stretched and over-worked, it didn’t go over too well with my body and thus…I went to yoga, had a sucky class, and afterwards sought advice from my instructor on whether or not I should quit the challenge.
I told him that I’m doing the challenge, I run, I CrossFit, and I don’t understand why I’m getting hurt and how no one else in the challenge is.  I also told him that I don’t like coming to class and having to “half ass” it because my hamstring is hurt and I thought maybe I should just quit.  To which he explained,
“You’re doing too much. I’m not going to tell you to quit one thing or another, but you can’t do everything 100%. If you want to run and you want to CrossFit, and you want to do the yoga challenge then you must go easy in the yoga room.  Don’t force the postures, don’t push the postures, and don’t have any expectations for your practice. Just come in here and do the yoga.”
Sounds Easy Right?
Hearing the words, “Don’t have any expectations, just come in here and do the yoga” doesn’t sit quite right with me.  But, unfortunately since I can’t have my “yoga cake and eat it, too” I have forced myself to make a few changes this week.  The most important, being that I moved from the front of the room, to the middle/back where I’m less likely to push beyond what I probably should.
Balls in the Back Row Anyone?
The Upside of Being in the Back: No pressure to perform.
The Downside: Balls. In. Your. Face. 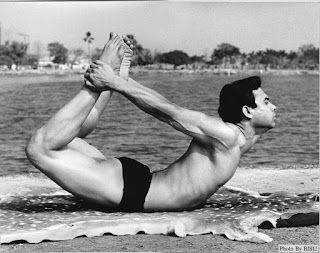 Indeed. This pose directly in front of me. Dude in short, cotton shorts. No undies. Me looking forward. Balls in my face. Me throwing up a little bit in my mouth. Me terrified to look forward the rest of the class.
So…there you have it. It has been an eventful 35 days.  Until next time, I’ll be trying to master the “no expectations, just do the yoga” mantra.
Peace.CheersToHalfwayThere.Love.