Here’s the deal folks….we all crave comfort foods, some more than others.  I don’t typically crave junk, I genuinely love and crave salads for pretty much every meal but every once in a while (as in yesterday) I was sitting on the couch and all of a sudden “mac & cheese” popped in my head.  Quickly, I did a mental inventory of what I already had in the kitchen: Greek yogurt, nutritional yeast, and jalapeno yogurt cheese.
Since the weather was nice and cool, Rick and I decided to walk to the grocery store to pick up the main ingredient: Quinoa Noodles.  After reviewing different brands; I chose this one. 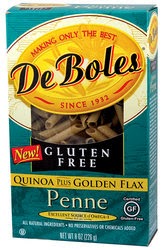 Which leads me to this #ProTip: Just because the box says “Quinoa Noodles,” “Sweet Potato Chips,” or even “Real Veggie Chips” doesn’t mean it contains any of what it claims.  Most of the time the “sweet potato” or “spinach/veggie” part of the chips is the last ingredient and is “sweet potato flakes or dehydrated spinach flakes”….on top of corn chips. The same is true of quinoa noodles. After flipping over boxes and doing some comparisons, this brand was one of the only ones that actually included quinoa flour not corn flour, etc.
Now….on to the recipe. 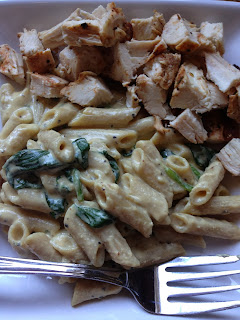 Serves: 4 people (3/4 cup) each
Ingredients: (what I used)
**The nutmeg adds an interesting twist and I’ve seen it used in other “cheesy” recipes before. Try it if you dare. I also saw dijon mustard (1 teaspoon) used in a similar recipe, but left it out.  You could also boil the noodles in 1/2 the water it calls for and 1/2 low sodium vegetable broth.
Preparation:
For a seriously comfort food-fix without the belly aches, you could pair it with my Oat-Flax Chicken Tenders recipe.
Nutritional Info: 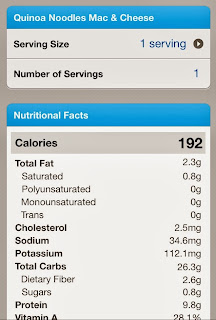 Serving size is calculated based on all the ingredients above at 3/4 cup per serving.  Plated with 4 oz grilled chicken, it rounds out a meal consisting of:
~312 calories
~4 grams of fat
~26 grams of carbs
~36 grams of protein