“So many fitness journeys start with wanting to be healthy and then end in doing unhealthy things to get lean/big” – Justin Cas.

It’s true. Everyone’s health and fitness journey is truly unique. We all come into them with different previous life experiences, dietary preferences, ailments, habits, attitudes, goals, etc. Some people can let “good enough be good enough” while others take things to the extreme – taking the journey to true health and wellness and the idea of being “fit” to unhealthy, damaging, and far from wellness at all.
I can tell you that in my 15+ years of being in the health and fitness industry (I started working in a gym/wellness center in high school), I’ve seen and heard a lot of crazy, extreme, ridiculous habits, and practices when it comes to people becoming healthy and fit/maintaining their “health” and “fitness”.  I’ve shared with all of you before that I am one of those people – I’ve abused, over-used, undernourished, and taken my health, wellness, and fitness for granted in the past 15 years. And it hasn’t come without repercussions; I’m paying for it today. I would’ve never thought all the “good” I thought I was doing to my body, the physique I was chasing back then would bring me to where I am now: hypothyroidism, blood work that reflects that of a post-menopausal woman, etc all because I wanted to be skinny, lean, and certainly not fat.
Obviously my personal example can be seen as extreme, but it’s not uncommon for a lot of people out there.  I’d argue that at least (at least) a quarter of the people advised by a medical professionals to “change their diet” or become “healthier” have developed some not-so-healthy habits and have done some not-so-healthy things in their quest for wanting to be “healthier”. Ie: We look for the quickest fix to whatever is “not working” and ultimately the quick fix results in a long, slow repair.
Comparitavely, doing whatever it takes to “get big” can have just as damaging effects. From steroid abuse to eating ungodly amounts of processed foods to put on mass; getting “big” can be just as bad for ones endocrine system/body as getting extremely lean.
I’ve shared with you before in a previous post “Just Eat Healthy…Really?” six scenarios of what “healthy is NOT” when it comes to eating, but what about when it comes to other habits and practices?
Healthy Habits Gone Wrong #1: Weighing Yourself Daily
I’ve said it a hundred times, I’ve written about this subject a thousand, and nevertheless I still hear people who wear this metric as a badge of honor or a coat of disgust. Weighing yourself once a week, or maybe just checking in with yourself once a month is great (if that’s your thing), BUT weighing yourself daily and multiple times a day; that’s not mentally or emotionally healthy. For a lot of people that develop an unhealthy obsession with the scale; that fleeting three-digit number becomes a validation of you as a person. And that’s just dumb. You’re pretty much basing your self-worth on whether or not you took a poop, consumed more/less sodium, etc…. I could write on this subject forever because I’ve been under the spell of the scale before a few different times in my life, but we’ve got other stuff to cover so read more here later if you’d like: Your Hips May Not Lie; But the Scale Sure Does

“Despite popular belief, you should not assess your health based solely on your weight—and certainly not on your Body Mass Index (BMI). BMI is based on body mass. Many very lean and muscular athletes have a high BMI! They perform well, despite their higher weight” – Nancy Clark, MS RD.

Healthy Habits Gone Wrong #2: Steroid, Fat Burner, Laxative Abuse
Heavily relying on an outside substance to change something that’s going on (or not going on) physiologically without addressing the actual cause can not only lead to abuse of the substance but also a negative response.
I’ve never used steroids so I can’t divulge much into this topic other than the lasting damage caused by chronic use and abuse of them has been reported, documented, and shared more than enough times to not know that it’s not a great idea; nor is it healthy. There’s only so much mass your body can put on naturally in a timely and healthy way; again –looking for the quick fix with little regard to the long, slow repair that follows always comes with consequences.
Fat Burners: I started experimenting with and using fat burners in high school and continued using them throughout college (until one time in the middle of a race I thought my heart was going to explode and I decided then and there I was done with them). The problem with “fat burners” is that your body/metabolism gets used to them and you have to end up taking more or more potent ones to have a similar effect as they did in the beginning. The stress fat burners create on your metabolism +stressing over what to eat and what not to eat + stressing the body by starving it + overdoing cardio; your body (my body) is/was living in a constant state of stress and we know that chronic stress never does a body good!!
If you feel as though your body is not “burning fat” as quickly as you’d like it to be or at all; chances are – taking a fat burner is not going to solve your problem in the long run. There are a lot of other factors that determine fat loss, the speed at which you lose it, and there are plenty of natural, healthy approaches in getting there.
Laxatives: Having to take a laxative regularly to produce bowel movements is typically an issue (if not due to certain illnesses, medications, or conditions) that can be solved by looking at your diet, nutritional deficiencies. I have no problem with people taking dandelion root, drinking herbal teas, etc to get things moving every once in a while – even once a week is beneficial for a lot of people who aren’t blessed with regularly functioning bowels. However, relying heavily on laxatives to “feel lean,” to “get rid” of binged calories, or lose a few pounds is not only abusing them, but it can create an unhealthy environment and lasting damage in the gut and bowels. Most of the weight “lost” is due to loss of water; not calories or fat mass.

“The belief that laxatives are effective for weight control is a myth.  In fact, by the time laxatives act on the large intestine, most foods and calories have already been absorbed by the small intestine” – nationaleatingdisorders.org.

Healthy Habits Gone Wrong #3: Over-Training. Obsessed with Exercise
Again, I have had plenty of experience with this topic and I’ve written about it one hundred and one times as well. Exercising is great. Being fit is wonderful. But when it becomes an obsession, when all you can think about is your next workout, how you’re going to burn calories, did you burn enough, when it interferes with your relationships, happiness, social life, sleep, career, and your body begins to break down metabolically and physically, it’s no longer a healthy habit, but an unhealthy addiction.  I enjoy training/exercising like nobody’s business. The quote “Where is the rest muscle and how do I train it?” is me; I get it  – there’s so much to work on, so much room for improvement, so much that “needs” to be done that we want to forever train, get better, do more and more and more. But keep in mind: More is Not Better; Better is Better. Work hard when it’s time to work and rest hard when it’s time to rest. If you get injured and can’t participate in certain activities; you will not die. Fill your newfound time with something equally rewarding; write, read a book, take a hot bath, cook, bake, call a friend, stretch, go to a yoga class…. 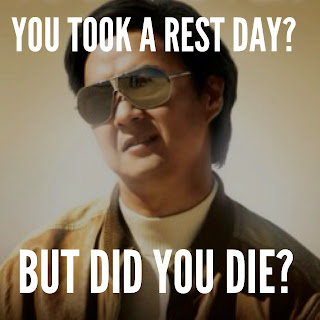 Healthy Habits Gone Wrong #4: Appearance/Distorted Body Image Trap
I tell people all the time that if I didn’t already have a distorted body image before prepping for a figure competition, it was magnified to the thousandth degree afterwards. I won’t go into all of that again, but at some point in our fitness journey and wanting to become healthy, other people start noticing and sharing their opinions (good and bad) in regards to our appearance and our bodies. For some, these outside opinions can roll off and be forgotten, but for others it can create a distorted body image and an obsession with appearance vs. true health.
I love the Health atEvery Size Movement:

“Let’s face facts. We’ve lost the war on obesity. Fighting fat hasn’t made the fat go away. And being thinner, even if we knew how to successfully accomplish it, will not necessarily make us healthier or happier. The war on obesity has taken its toll. Extensive “collateral damage” has resulted: Food and body preoccupation, self-hatred, eating disorders, discrimination, poor health… Few of us are at peace with our bodies, whether because we’re fat or because we fear becoming fat. Health at Every Size is the new peace movement. It is based on the simple premise that the best way to improve health is to honor your body. It supports people in adopting health habits for the sake of health and well-being (rather than weight control). It encourages you to accept and respect the fact that humans come in a diverse body shapes and sizes. No one idealized shape is best—not even for athletes”  – haescommunity.org.

There are so many other “Healthy Habits Gone Wrong” I could share with you. Several years ago I started keeping a journal of all the messed up stuff I would overhear in the gym, locker rooms, from clients, etc in the hopes of writing a book to shed light on how preoccupied we can become with health, diet, and exercise – but it got lost somewhere in my many moves since then. These four habits are just scratching the surface on learning to identify and overcome unhealthy behaviors and developing better ones. Making behavior changes are hard, the emotional and mental ties we develop to food/exercise addictions can’t be conquered in a day and they can’t be solved by substituting with an equally destructive behavior.

Food should be enjoyed, it should give you energy, and it most definitely should be respected; not abused and not used as a tool of self-abuse. Exercise should be enjoyable and empowering. And your body is to be honored at all time, for what it is now, what it has been, and what it can be. I love this from the JillFit blog today; I think it ties up this post perfectly:

“Accepting yourself as long as you look a certain way isn’t self-love. It’s self-destruction. Dieting is not self-care. Restrictions are not nourishing. My size isn’t a measure of my success anymore. Instead, I now measure progress by how peaceful I feel about my body no matter what happens. I can never control outcomes, but I can always control my perception of those outcomes”